AC/DC For Those About To Rock (We Salute You) Video

AC/DC For Those About To Rock (We Salute You) Video 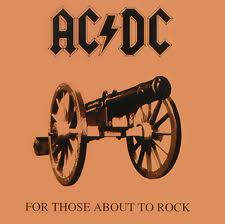 Continuing with My Concerts, December 11, 1981 was the one and only time I saw AC/DC. This was the “For Those About To Rock” tour. The show was mind blowing. I still want to see them again. For those of you that remember, this was the end of a very controversial time.

More extreme than when Elvis was popular and they wouldn’t show him below his waist dancing and rock and roll was evil. In the late 70′s and early 80′s, parents had album burning parties. In the late 70′s, when I was still a teen, my parents burnt some of my albums because (apparently) if you played them backwards, they had secret messages.

Many bands were Satanic. For example Black Sabbath and ELO. ELO, are you kidding me. They also decided that some band names were acronyms. AC/DC meant Anti Christ / Devils Child and KISS was either Kings in Satan’s Service or Knights in Satan’s Service. There is nothing Satanic about Gene Simmons (ever watched family jewels). Don’t even get me started about Paul Stanley, he’s a nice guy. Just watch his cooking videos on YouTube with his wife.

The parents were wrong, just like they were with Elvis. music is music. We can decide in our own minds what’s right and what’s wrong. The bottom line is this, music makes you happy or sad (some tunes). Music is an escape. Music does not establish your afterlife, you do. So parents, RELAX!!!!!