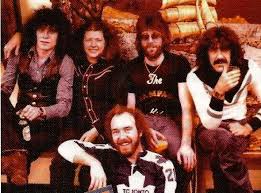 Today, is Nazareth. I first saw Nazareth at Maple Leaf Gardens in October of 1978. This was my very first concert. I saw them again October 23 1981, but the 1978 concert was very significant to me for 2 reasons.

The first reason, very simple, my first rock concert ever. The second reason, the most significant of all. I didn’t want to go alone, so I asked out Christine Locke. She was my high school crush. She politely declined as the show was on a Thursday night and her parents wouldn’t let her stay out that late.

I had no choice but to accept but thought it was she wanted nothing to do with me because I had a terrible stutter. Good for me, I still had the balls to ask out the most beautiful girl at Monarch Park SS.

I didn’t realize how wrong I was. We went through grade 11 and 12 as pals. I never asked her out again. Then, in grade 12, on the last day of school, she asked me if she could sign my yearbook. of course I said yes and didn’t give it a second thought.

After I got home, I decided to go through my yearbook signings. Everyone signed either the front or back page. I searched and searched, no Christine Locke. I finally found her message in the middle of the book. It would be ungentlemanly of me to elaborate on what she said.

Let’s just say this, when my ex wife read it, she threw out my yearbook without my knowledge. It’s now been 35 years and I still can’t go a week without thinking about Christine Locke. If I would have just tried one more time, I could have ended up with the love of my life.

The video should make sense now.

By the way, both times, Nazareth was awesome. They have an album called “Loud and Proud”. They meant it. For a week after both concerts I was saying “WHAT”.